There's nothing like the anticipation of going to see Steve Vai live in concert. I've seen him on three other occasions and actually met him on one of those. I would describe his guitar playing as infinitely accurate and his engineering chops as some of the best I've ever heard. I still don't think there is a rock guitar player living or dead who has surpassed his technical expertise, but that's just my opinion. I'll be seeing him and his band, The Breed, at the Jacksonville, Florida show. In my older days now, I'm not as turned on by guitar technique as I once was as a teenager. Ironically, I now have a lot of those chops that once eluded me when I really wanted them. Maybe that's for the best. Age and wisdom are growing a new musical beast within.

While I was in Iraq I wrote and recorded around 5 new songs on this very Powerbook. I started about 3 more that are unfinished. I'm not sure when I'll finish a complete project, but I've got some new distribution ideas. I'm no longer going to charge for my music. This may seem silly to some, but I don't earn my living via the music I write and record. To be honest, writing and recording hasn't earned me very much at all in the nearly 20 years I've pursued it. Comparitively, I've earned only a penurious, slightly larger amount by playing live music in the 15 years I've been doing it. Basically, music is a tough business to live on. I'm a clinical lab scientist during the day; in my off-duty time I'm a composer, guitarist, and studio engineer. There are a lot of great composers, guitarists, and engineers out there, and the Internet age is making it possible for all of us to discover each other. Since I have no fantasies that I'm going to suddenly become famous and earn millions through my hobby, I'd rather just share what I do with the world; my compensation will come only through the knowledge that my music is enriching someone else's life besides my own. Maybe my music, and not compensatory benefit, is how I'm to leave my mark on this planet.

So I plan to put most of my music up on CNET and make cover art and labels available on my web site for download. If someone finds they'd rather forego the time required to download and produce their own CD of my music, they can just pay a minimal amount to cover the cost of the disc and postage, and I'll make it for them and mail it right to their door. If they'd rather just use the new model and put the music only on their hard drive and iPod, that's cool too. But that's going to be my new music distribution model--shared freely with the world.

I'll only ask that downloaders not use my music for profit without my permission. Other than that...share and share alike!

Posted by Shane Hendricks at 21:42 No comments:

I've returned from my hellish travels abroad. One might be inclined to believe that an Iraqi winter is a mild experience in contrast with Iraqi summers, but though the temperatures moderate considerably, the monsoon season turns everything that isn't paved into a soupy morass. In short it was a miserable experience, except for the wonderful friends I made and the terrific Cuban puros I indulged in. I won't even discuss the mortar attacks; some things are better left unsaid. 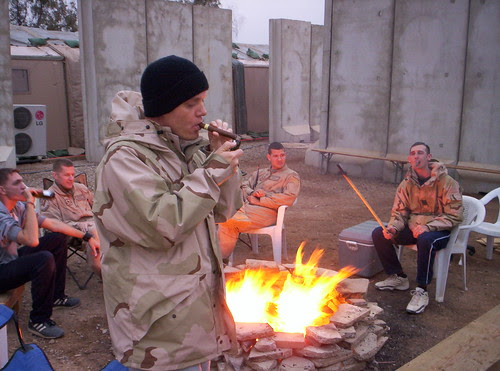 So we smoked a lot of cigars to pass the time (there are few better pastimes). I've been accepted for graduate school funding; now I must get accepted to graduate school. Let's hope all goes well.

I wrote a lot of music in Iraq, but I'm not sure when I'll publish it. Everything comes down to time.

Posted by Shane Hendricks at 07:03 No comments: